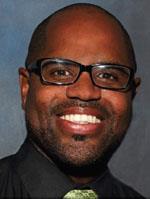 Dr. Rogers has been at Southridge Middle School since 2017.

Matt Vaudrey is new to Southridge Tech this year, and we are happy to have him on-board! With 15 years in Education as a math teacher, instructional coach, and Dean, Mr. Vaudrey has taught Kinder through 12th grade, even a drumline class! He lives in Fontana with spouse and three kids, and loves getting outside, playing video games, and doing nerd stuff