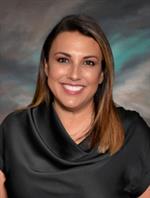 Ms. Zerbel was born and raised in Pomona and graduated from St. Lucy’s Priory High School in Glendora. She continued her education and earned both a Bachelor of Arts and Master of Arts degrees in Education from the University of La Verne. “My intention was to get a degree in business and took on a job as an instructional aide to earn extra money while attending college,” said Ms. Zerbel. “This ‘job’ as an instructional aide inspired me to change my major and to go into education. I haven’t looked back since.” She has worked in education for 18 years and served students in various positions. “I have been an elementary and middle school teacher, an assistant principal at both the elementary and middle school level and an elementary principal,” Ms. Zerbel continued.

Ms. Zerbel has been at Maple Elementary School since the beginning of the 2016-17 school year.

Karla Brewer-Edet began her educational career in the Fontana Unified School District in 2006 as a fifth-grade teacher at Randall Pepper Elementary. Mrs. Brewer-Edet spent seven years teaching in the district as both an elementary and middle school teacher before accepting the position as an Assistant Principal at Southridge Middle School in 2014.