“Amazing, top notch, and future leader,” are a few expressions Barbara Gonzalez Lagunas’ teachers use to describe this 8th grade student at Alder Middle School. In February, Barbara received a Gold Award in the Fontana District Science Fair and advanced to the San Bernardino Regional Science and Engineering Fair. In March, Alder was notified that Barbara received a gold place finish in the Regional Science and Engineering Fair and received The Lemelson Foundation Early Inventor Prize for her project:  “Refraction in a droplet: Microscope.” Her goal was to make a microscope that can project what a droplet of water contains on a big screen. She used the laser that pointed to the water droplet sample that the syringe held and projected on a screen. Barbara was able to make the microscope that could project onto a large screen where one could see the small microorganisms living in just one droplet of water.

Barbara has grown up in Fontana and attended Ted J. Porter Elementary School prior to Alder Middle School. She plans to attend Summit High School and pursue an education in the Arts and Sciences following high school.  Barbara is a successful student and is currently earning a 4.0 GPA. She attributes her academic success to her supportive parents and younger brother.

The Alder Falcon family is very proud of Barbara and wishes her the best on her educational journey. 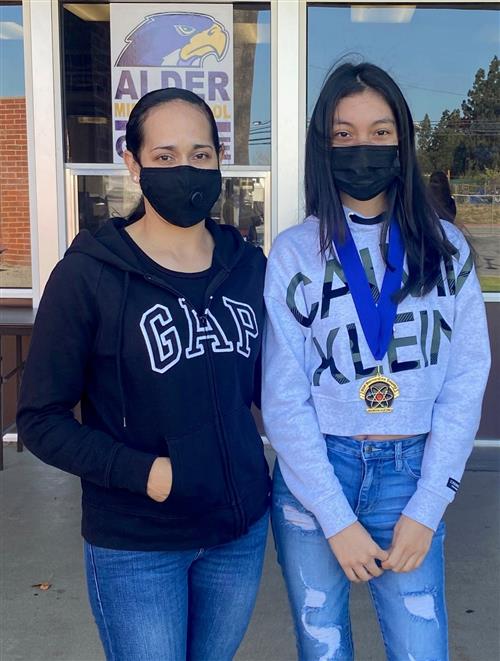