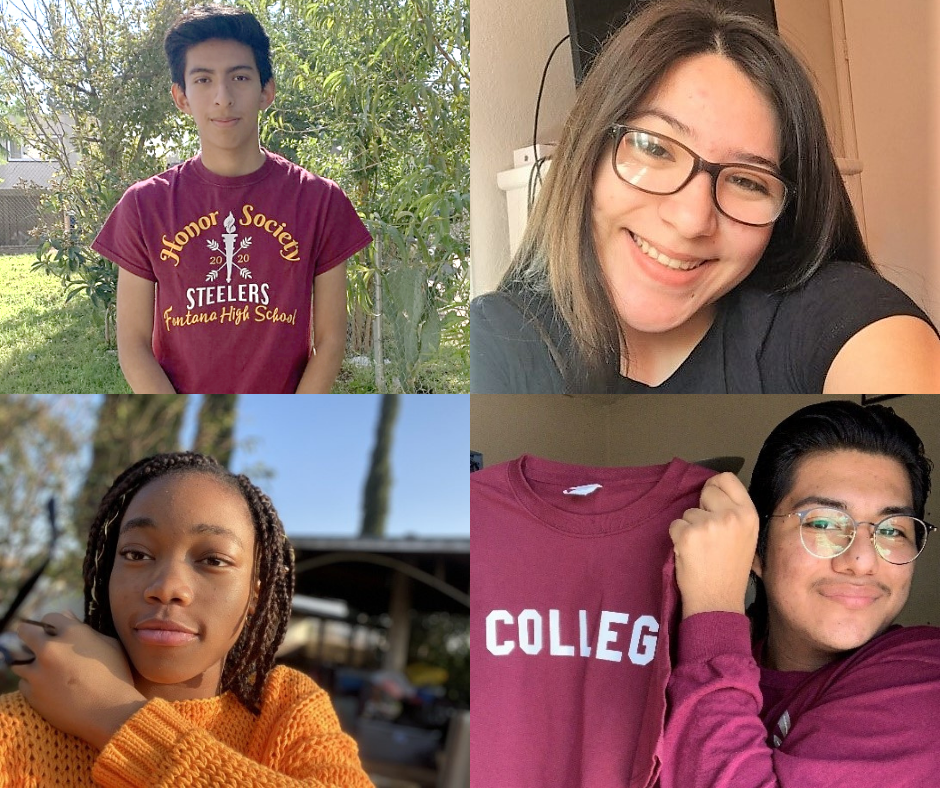 Victor Campos, Vanessa Gutierrez, Fatima Kamara and Ernesto Sanchez are among nearly 7,000 students across the United States in consideration for early admission and four-year full scholarships if matched with a participating university.

“Our four Steelers are the epitome of Living Maroon and represent our college and career focus to its full extent,” Fontana High School Assistant Principal Joseph Malatesta said. “We couldn’t be prouder of our Steelers, who are representing FOHI among the nation’s best of the best.”

Campos competed in varsity cross country and track and field for four years, qualifying for CIF and an all-league championship team. He also serves in FOHI’s California Scholarship Federation (CSF), Key Club and Advancement Via Individual Determination (AVID) program, as well as volunteering for his local church.

Campos is passionate about math and science and plans to pursue a career in engineering.

Gutierrez was chosen as a QuestBridge College Prep Scholar in her junior year, providing her with awards, resources and guidance from to help her develop a strong college application. She has served as a junior honor attendant, as well as an officer in Key Club and CSF, juggling extracurriculars with rigorous studies in FOHI’s Certified Nursing Assistant program.

Gutierrez’s commitment to academic excellence earned her multiple Jerry Dison Awards. In college, she hopes to join pre-med organizations, do research in biochemistry or psychology and gain work experience in the healthcare field before pursuing a career as a physician assistant. She also has plans to start a small art business.

Kamara, who is serving as Fontana Unified’s 2020-21 Board of Education student representative, has maintained a strong GPA while immersing herself in extracurriculars. She has served as the student representative to FOHI’s School Site Council, as well as a peer mentor in Link Crew, a junior honor attendant, a CSF member and part of the Positive Behavioral Interventions and Supports team.

Kamara also volunteers at the Lewis Library and Technology Center. Her academic excellence has earned her multiple Jerry Dison Awards, Student of the Month and Most Outstanding AVID Student. Kamara dreams of attending Yale, majoring in political science, becoming a lawyer and starting a nonprofit.

Sanchez has made his mark in the classroom and on the track as a stellar student-athlete. As a straight-A student ranking in the top one percent on campus, Sanchez has earned multiple Jerry Dison awards and served as a junior honor attendant. He has competed in cross country and track for four years, serving as captain of FOHI’s hurdles team.

Sanchez, who plans to pursue a bachelor’s degree in chemical engineering, credited his AVID and AP teachers for stoking his thirst for knowledge and urge for accomplishment.

The QuestBridge National College Match is a college admission and scholarship process through which high-achieving, low-income students can be admitted early with four-year scholarships to QuestBridge college partners. Students are asked to rank up to 12 colleges.

FOHI’s four finalists are among 11 in Fontana Unified’s Class of 2021, all of whom will learn if they have been chosen by a QuestBridge college partner on Dec. 1.