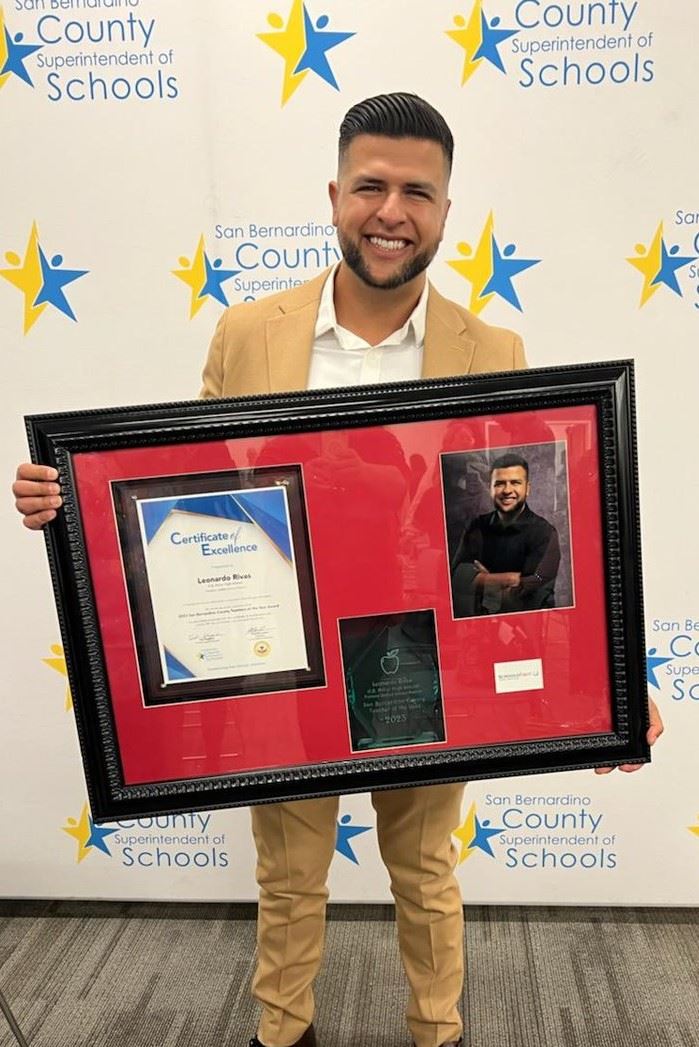 FONTANA, CA – Former A.B. Miller High School media teacher Leo Rivas was named a San Bernardino County 2023 Teacher of the Year, a fitting final tribute for the popular teacher who inspired scores of A.B. Miller students to develop a passion for TV and film production before leaving the District to work for the AIDS Healthcare Foundation.

Rivas, who was previously recognized as the Fontana Unified 2021-22 Teacher of the Year, helped create a three-year media production pathway at A.B. Miller, teaching beginning and advanced concepts of TV and film production, giving students a chance to earn college credits, and paving the way for the acclaimed student-produced news program ABTV and the annual A.B. Miller Film Festival. He is one of four educators to be honored as a San Bernardino County Teacher of the Year.

“I am so thankful to Fontana Unified and A.B. Miller for giving me the opportunity to work with such talented, creative and motivated students,” Rivas said. “This was the opportunity of a lifetime and I hope that the production pathway continues to inspire students to meet their potential and thrive in the years to come. The students, faculty and staff at A.B. Miller are amazing. I loved working there.”

Rivas, who also teaches cinema studies at Chaffey College, came to A.B. Miller in 2013 after working several years as an associate producer for FOX Sports L.A., where he oversaw pre- and post-production for UEFA Champions League soccer matches. Born and raised in the Inland Empire, Rivas embraced his teaching position as a way to open student’s eyes to the possibility of a career in media.

“Working in the media is all about being persistent and self-sufficient,” Rivas said. “Growing up in the I.E., these jobs seem unreachable. I tell my kids over and over, you have to learn a variety of skills, then it’s up to you to use your tools and advocate for yourself. The industry is tough, but a successful career is within reach. You just have to push yourself. Job offers aren’t going to just fall in your lap.”

The A.B. Miller TV Production pathway has three levels. In the first level, students learn the basics of camerawork, editing and storytelling. The second level is an introductory broadcast class, with students working together to stage a newscast on ABTV. The third level is a U.S. and World Cinema class that is articulated to Chaffey College. Students who pass this class can earn three transferable college credits.

The pathway began to take off in 2016, after Rivas applied for a career technical education incentive grant from the California Department of Education, which enabled him to stock the class with state-of-the-art equipment, such as cameras, lights, editing machines, microphones, a dedicated broadcast studio and even a news van.

Though he greatly enjoyed his teaching position, Rivas had already decided to leave the school and take a new job when it became his turn to be in the spotlight.

On the final day of the 2021-22 school year, Rivas was chatting with his students in class when the door opened and the A.B. Miller marching band and cheer squad, led by then-assistant principal and current A.B. Miller principal Dr. Barbara Kelley, came in for a spontaneous celebration. Rivas thought they had come to bid him farewell on his final day of classes at A.B. Miller.

Instead, there was a twist. Kelley had come to tell Rivas he had been named FUSD’s Teacher of the Year. Rivas, who had been nominated several times but never won, broke down in class after receiving the news.

“Leo Rivas is more than a tremendous teacher, he is a wonderful, caring and giving person,” Kelley said. "When I learned he had won the Teacher of the Year award, I knew we had to give him an appropriate sendoff. He has done so much to instill the skills and confidence into his students and exhort them to live their dreams. I will miss him dearly, but now he is in a position to help people across the globe.”

Rivas left A.B. Miller at the end of the 2021-22 school year to serve as Program Director for the AIDS Healthcare Foundation office in San Diego, a position that affords him the opportunity to travel all over the world.

“I wanted to challenge myself and, as my students already know, I love to travel,” Rivas said. “I haven’t closed the door on teaching, but I needed something at this point to push me out of my comfort zone. I am most proud of initiating the A.B. Film Festival and establishing ABTV. I cherish my time at A.B. Miller and all of my wonderful colleagues. Thank you so much for giving me this opportunity.”