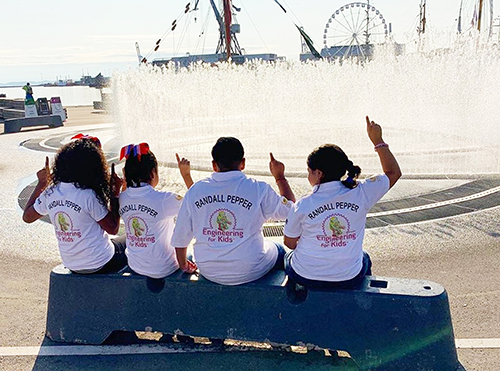 FONTANA, CA – Wayne Ruble Middle and Randall Pepper Elementary robotics students made a triumphant and award-winning return from the World Robot Olympiad (WRO) Friendship Invitational, after dazzling the global community with their expertise, teamwork and sportsmanship.

The international competition, held Aug. 1-4 in Aarhus, Denmark, netted the Randall Pepper LEGO Panther squad with the International Friendship Award for their slogan, “3 Countries, 3 Teams, 1 Friendship,” created in collaboration with students from Germany and Nigeria.

“This was a great learning experience, to be on the world stage and understand the value of hard work and collaboration,” Wayne Ruble eighth-grader Joshua Narciso said. “When we met the international students they treated us like equals, which made us feel really good.”

The Randall Pepper LEGO Panthers, led by fourth-graders Mariah Torres, Heydi Pena and Daisy Santiago-Canseco, and third-graders Alexander Cuamatzi-Aguilar and Mario Ceja, tied for first in the WeDo 10 and under division, after recording a perfect score. Ceja was unable to travel to the competition.

“This is an amazing accomplishment for our students,” Randall Pepper Principal Dr. Annette Beasley said. “We only introduced robotics into our curriculum in January, but through 15 weeks of intensive training, our kids showed what can be accomplished when they work together as a team.”

On their first day in Denmark, the students visited the original LEGOLAND in Billund. The next day, they built and coded their robots and mingled with their international peers during a robotics-themed scavenger hunt at an amusement park in Aarhus. The third and fourth days were devoted to the competition and awards ceremony.

“When we first started working with robots I thought the furthest we would get was the California Legoland,” Chaudhery said. “I would recommend robotics for any student who wants to participate in an after-school activity that is educational and fun.”

“This was an amazing opportunity for us. None of it would have been possible without the support of our principal, our coaches and our parents,” Torres said. “Thank you for believing in us. I can’t wait to see what the future holds for us.”

During the WRO national qualifier in April, The Beech Avenue Elementary HoodBots won first place in the WeDo 11-12 division but were unable to travel to the international competition.

“We could not be prouder of our students for representing Fontana and the United States with grace and benevolence,” Fontana Unified Superintendent Randal S. Bassett said. “Congratulations to our students, coaches and district partners for their hard work and determination, which has given them memories that will last a lifetime.”